A sleek and sophisticated love letter to movies all things heist; Monaco: What’s Yours Is Mine manages to maintain a consistent, and beautiful art style, without sacrificing gameplay. 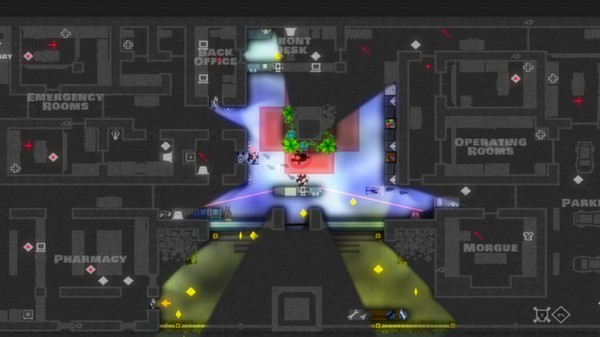 A team of four robbers descend on Monaco in what can only be described as Ocean’s 11 crossed with Benny Hill as you watch your heist’s careful preplanning crumble before your very hands as you frantically rush between room and room, hastily grabbing coins, your ears filled by the blaring soundtrack and assorted yells from panicked guards.

The entire game has a very unique style, your cone of vision indicated by a bright coloured light. Unseen areas are monotone floor-plans. Guards cannot be seen around corners, unless playing as the lookout character, and this creates a large sense of mystery, especially when entering an area for the first time. Although pretty, the constantly moving cones of vision become disorienting, and sometimes a little nauseating, especially when moving very fast.

The unique visuals are complemented by the superb soundtrack, a mixture of classic noire-style piano themes combined with some modern elements. The obligatory “indie-game end credits song” (Portal being patient 0 in this epidemic of quirky music) is present and fairly memorable.

Your coin collection can be aided by helpful character abilities, such as the beggar’s monkey (a little kleptomanic furry friend intent on grabbing all things shiny).

If stealth really isn’t your style, an assortment of weapons, from the silent crossbow to the not-no-silent shotgun are available. The small ammo pool and loud noise created by these weapons makes them fairly impractical however. Combined with the minuscule aiming graticule and over-sensitive aiming, the use of weaponry is probably more trouble than its worth.

Monaco: Whats yours is mine has a huge number of (very well crafted) maps. This is ehanced by Steam Workshop support. PC users are treated to a smorgasbord of community created content. Not in the mood for CO-OP (or just dealing with frustration from repeatedly failing a heist)? Well then, try your hand at the various available PVP modes; a series of frantic coin grabbing rushes on small square maps.

The jack-of-all-trades, that is Monaco even comes complete with a zombie mode for no additional cost! (*cough cough* red dead redemption we’re looking at you). The zombie mode (nicknamed “Zonaco”) and “Classic mode” alter the game’s gameplay and change aspects of maps, and even some of the musical scores, making the Monaco experience refreshingly different each time.

Monaco: What’s yours is mine is one of the pinnacles of indie gaming, and being recently made available on steam free of charge (for a short time) it is definitely worth a look, even when it’s not free, the small £10.99 price tag makes it a must-have for any Steam gamer. There is also a slightly more costly Xbox 360 port available. Although more expensive, and a slightly limited experience (with the lack of Steam Workshop), paired with a few other avid heisters in local co-op, you’ll surely have a blast.