For many, including myself, Learn with Pokémon: Typing Adventure is a complete oddity. A typing tutorial game, an unusual concept but certainly one that isn’t unheard of, but for the Nintendo DS? The idea of pairing the tiny handheld device with a large stand and keyboard seems absolutely absurd, but that’s exactly what the weirdos over at developer Genius Sonority did. The strangest part however is that this unlikely match of technology came about thanks to a shockingly sound reason. 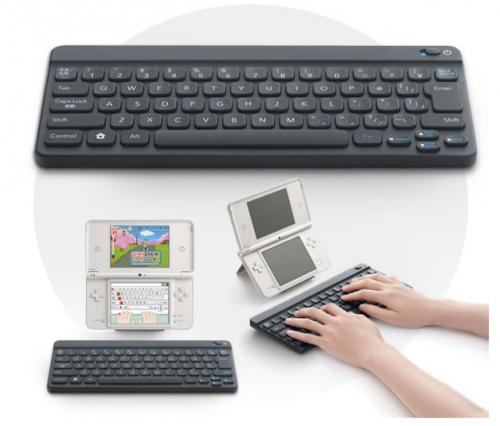 For many, this will likely be the first time you’ve ever even heard of this product due to its rather strange release status; only seeing the light of day in Japan (obviously), The United Kingdom and Australia. Even so, in the countries where it released in the West it suffered very poor sales; evidenced by availability brand new on Amazon to this day despite being a sought-after collectors item for those in the know.

Now, before we move on to the reasons behind the odd piece of kit I just want to address the elephant in the room. Those with a knowledge of the DS’ hardware are likely scratching their heads as to how exactly this wireless keyboard works. The obvious answer would be “via bluetooth duh” but that’s not quite the whole story. No models of the DS offer bluetooth support; not even the very latest 3DS lines. This lead to the creation of one of the most interesting and unique cartridges in the DS library.

Despite its unassuming appearance and regular retail price the Learn with Pokémon: Typing Adventure packs its own Bluetooth chip, powered by the system power supply when the cartridge is inserted. Although I wasn’t able to find any images of this chip, and I’m certainly not cracking open my copy to check, I’ve heard from various sources over the years that it’s definitely there. That or it’s just a convenient cover story to mask the fact the keyboard operates off of some kind of ancient and extremely forbidden dark magic.

To fully understand the purpose of this device, and the reasons for its conception, it’s important to first look at the wider context of the state of computer literacy in Japan. Despite Japan’s prevalence on the technology scene, the population in fact has one of the lowest computer literacy levels in the developed world. Demonstrated by the handy graph below from the OECD Skills Outlet study1:

Many people arrive at job interviews after very little exposure to computers, some even lacking the ability to type. Likely due to cramped living spaces in cities and lesser access to resources in rural areas, a situation has arisen whereby the majority of technology used by the population is mobile. The average person in Japan is far more likely to own a mobile phone or a tablet over a desktop computer. Even more likely to own say… a Nintendo DS.

Aiming to capitalise on the lack of essential computer knowhow Learn with Pokémon: Typing Adventure aimed to offer those without ready computer access the opportunity to learn how to type rapidly and accurately.

This still leaves one question unanswered however. Whilst Japan suffers from a general lack of computer skills, justifying its release there, why was the very same product released in Australia and England where computer literacy levels are just fine?

The answer is surprisingly simple. Japanese keyboards are almost identical to the British (and by extension Australian) keyboard layout2. All that Genius Sonority would need to do to bring the product to these markets is simply translate the game itself, which due to the game’s inherent simplicity couldn’t have been too hard a task, and then not print the Kanji characters which sit below the letters.

Banking off the success of the Pokémon would guarantee at least a few sales combined with the simplicity of the translation job, it would have been illogical for Genius Sonority to not bring the game to the commonwealth.

That banking off the brand didn’t work out too well however. The mediocre nature of the game itself lead to low sales and a mixed reception that quashed one of the most beautifully weird mixes of technology in gaming history. Even Amazon reducing the price to £9.99 in a flash sale failed to gain any excitement. The keyboard itself is probably the best thing to come from Learn with Pokémon: Typing Adventure, superbly built and quite frankly an absolute joy to type on. It’s excellent value especially considering it also boasts compatibility with not just it’s packaged game but any PC or mobile device.

And yes, before you ask, I even used the keyboard to write this review.