Walking around city centres these days it’s easy to see that we’re living in the era of tech start-ups. Almost every corner you see is now populated by cliquey cafes crammed with checked-shirt wearing, latte-drinking hipsters out for a break from their pot-planted desks where they sit on bouncy beanbags, not chairs. What happens, however, to all the fledgling companies which don’t make it, the ones which never get the shiny office buildings or gain bean-bag chairs? Going Under is a game which attempts, in a very light-hearted manner, to answer this question; taking you on a journey through the dark underbelly of Neo-Cascadia – the city where tech start-ups come to die.

A rogue-like, the title ‘Going Under‘ refers not only to the failing companies, who’s sprawling underground offices form the majority of the game’s setting, but also the physical act of descending into these dungeons at the start of each new run. Inside of these arenas, combat is third-person and melee oriented, with a particular focus on improvisation. Like Dead Rising, players can pick up and make weapons of the objects in the world around them – although the brutally bloody chainsaws and gold clubs of that game are replaces with more light-hearted cardboard boxes or staple-guns. There’s also a weapon durability system, which some will find particularly reminiscent of Breath of the Wild, whereby the objects you collect to use as armaments smash into pieces after only a few attacks.

There’s something undeniably enjoyable about your trusty wet-floor sign suddenly smashing mid-fight, sending you frantically flailing toward the nearest weapon in the room regardless of level or type. This unpredictable pandemonium is almost encouraged by the fact that your only dodge move, a basic dodge roll, automatically equips the nearest weapon if you don’t have one in your hand. This lead to many hilarious (and intense!) encounters where my high-level battle-axe unexpectedly exploded leaving me to fend off a room full of enemies with only a mop.

The inclusion of a weapon durability system is an excellent way to encourage the player to experiment with new weapons and try everything the game has to offer in a genre where, traditionally, gameplay involves working out the best combination of items in the game and sticking to them almost religiously. If there are no items nearby, the player character can always engage in combat bare-handed, which is very helpful in a cinch but with large enemy health bars is far too ineffective an endeavour to ever be considered a viable playstyle.

Luckily, it’s quite hard to find yourself without weapons as when you first enter a dungeon there is always a small selection of basic items to pick up before entering the first room. Rooms act almost as compact stand-alone combat arenas which, once entered, cannot be exited until a number of enemies have been defeated. The rooms themselves are randomly laid out but often include a number of items to discover like weapons and health pickups. Many enemies also drop the weapons that they carry which can be picked up.

There is also no time pressure to enter the next room once the one you are in is clear, giving you ample time to explore and pick up any items you missed. Some rooms also give you the opportunity to complete challenges in order to gain a drone-delivered crate containing more powerful gear. If you’re particularly lucky and find a room with a lot of decent gear, you don’t have to leave any behind with the player’s pockets being able to carry up to three weapons which can be quickly swapped at the tap of a button.

Each time combat ends you have breathing time where you are free to explore the room and collect any items you may have missed before you move on. Hovering over any item in the world shows you its name, a brief (and often amusing) description in addition to a quick indicator which shows if the item is better, worse than or the same as what you currently have equipped. This is a fantastic little quality of life addition which makes good gear much easier to identify than in games with more traditional numeric stat systems.

There is also the chance for a shop to spawn on the map, styled like a hipster coffee shop, in which you can spend the money you pick up from defeated enemies on a variety of trendy soya-based health items. In addition to health buffs you can also buy ‘skills’ which grant powerful abilities like elemental attacks or increased damage. If you’re particularly short on money, floors can also contain a room where a skill which can be obtained for free. There is also a chance for a room with a charming curse to salesman to appear who will exchange up to three skills or items for a debilitating de-buff. These include things like enemies exploding on death or all of your weapons breaking after one hit and create an enjoyable risk vs reward dynamic.

In Going Under‘s small hub world, styled after a lively office building and serves as the place from which player can enter the game’s three dungeons, a number of NPC’s can be interacted with to gain “tasks”. These function like quests and present the opportunity to unlock characters as “mentors”. Your selected mentor provides a unique bonus to your run which gradually levels up through use. When accepting a task, you are shown one of the game’s charming cutscene, which feature some excellently drawn 2D sprites.

Dialogue is represented through playful smart-phone style text messages which pop-up on the screen as the scene plays out – accompanied by cute notification sound effects. Outside of cutscenes, the game’s visuals still remain one of its strongest suits. The low-poly pastel aesthetic is not only memorable and distinctive but looks absolutely adorably. Going Under‘s quirky bright colours, light-hearted dialogue and enjoyable slow-paced music creates a very calming effect and, as a result, playing the game feels almost therapeutic in the absolute best of ways.

Unfortunately, some fans of the genre might be put off by the game’s difficulty, which is a little on the easy side – particularly for a rogue-like. A lot of this easy difficulty is due to the game’s combat, which is certainly more on the casual side. The simple formula of frantic button-mashing and occasional dodging is very approachable, it has the downside of making enemy encounters, and even boss fights, trivially easy after only an hour or so of play. Although there is an option to decrease difficulty (by turning on ‘assist’), it would have certainly been nice to have some ways of making the game harder too.

I also found that whilst the use of lifeless text-to-speech in some cutscenes is certainly fitting, considering the setting of a tech company, it detracted somewhat from the game’s otherwise high degree of polish. On the subject of lifeless, the game’s hub world is very small with little to do other than wander around and occasionally interact with objects.

Lastly, the game’s humour is constantly enjoyable but feels a little bit tame. The tongue-in cheek parody of workplace culture and the modern tech industry certainly doesn’t reinvent the wheel and might feel somewhat generic if you’re used to that kind of comedy. Regardless of the fact that I personally found the game very funny, this particular brand of almost nihilistic millennial comedy might not be to everyone’s taste, and its constant presence in almost every facet of the game might go so far as to be incredibly annoying to some.

Going Under is a quirky and confident rogue-like. What it lacks in difficulty it certainly compensates for in style with its adorable visuals, fun (albeit somewhat basic) combat and relaxing music. It might be unpaid, but your adventures in the dungeon will certainly be an internship to remember!

Just so you’re aware! In order to facilitate a review this product was given to our organisation free of charge.

Knight Terrors currently sits proudly as the cheapest game on the Nintendo Switch’s estore; but is it worth picking up? 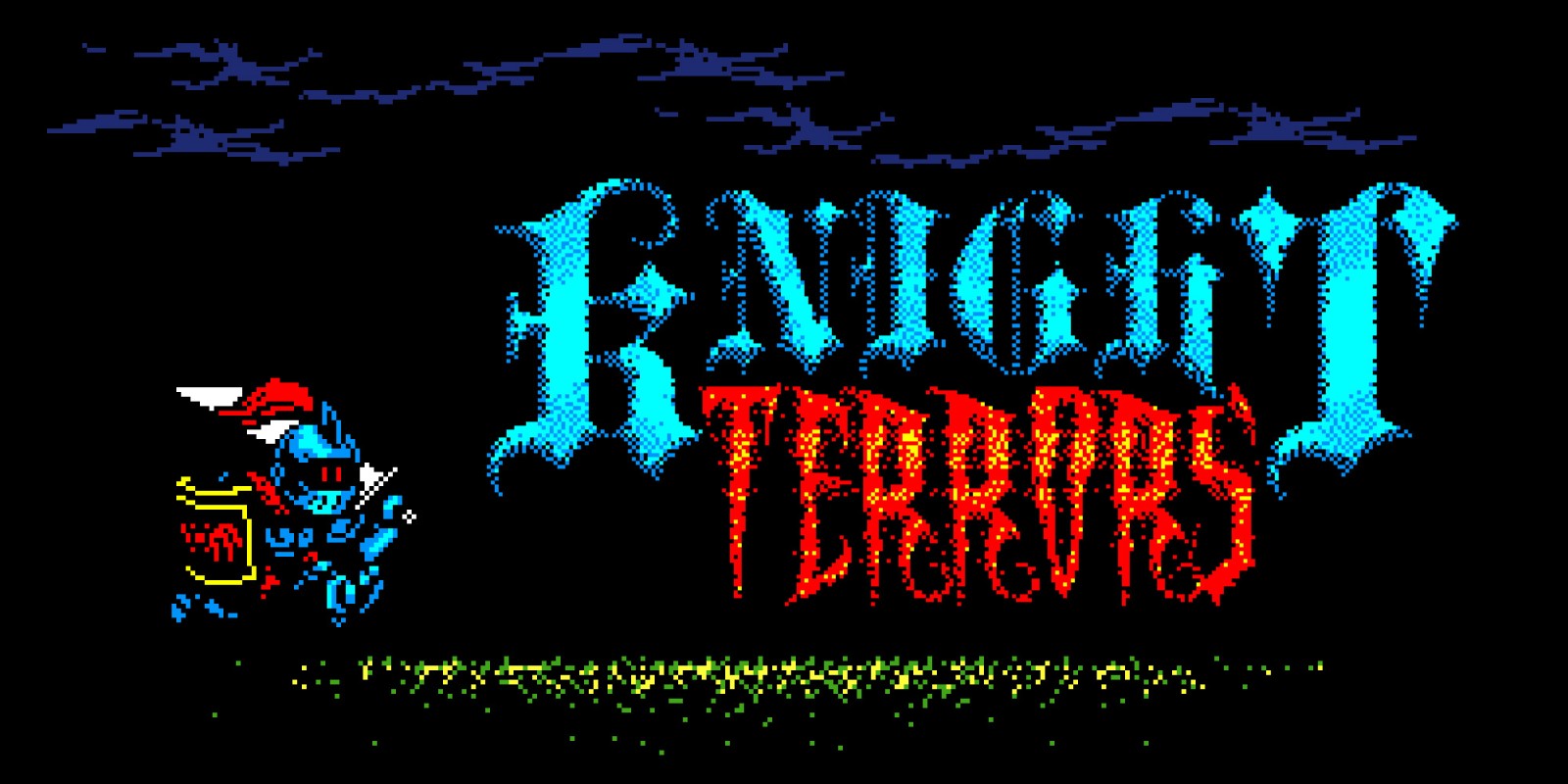 With interesting visuals, fun gameplay and a very low price point, what is there to lose in buying this game? At £2.69 Knight Terrors costs less than an everyday cup of coffee, and will certainly last you a lot longer.

Knight Terrors is an endless runner in its simplest form. Much like the infamous Flappy Bird, from which Knight Terrors obviously drew some inspiration, it’s this apparent simplicity which gives this game a strangely addictive quality.

The game also benefits just from being on the Switch. The crisp buttons of the Nintendo Joy-cons make Knight Terrors‘ two button gameplay a treat. Knight Terrors is also a game that is easy and fun to pick up and play, making it a perfect way to kill some time in handheld mode whilst on the move.

There are four distinct game modes to unlock, loads of unique power-ups and plenty of monsters to discover and slay. The pixelated graphics are complimented well by the music, a simplistic yet pleasant collection of various chip-tunes.

Whether you want a game to occupy you for afew hours on journey, want to get rid of some leftover quid in your Nintendo Wallet, or just want an enjoyable endless runner; Knight Terrors is the game for you.

Walking around city centres these days it’s easy to see that we’re living in the era of tech start-ups. Almost every corner you see is now populated by cliquey cafes crammed with checked-shirt wearing, latte-drinking hipsters out for a break from their pot-planted desks where they sit on bouncy beanbags, not chairs. What happens, however, […]

It’s a tad ironic that Rogue Legacy, a game all about children succeeding their parents, has taken almost seven years to come out with a sequel; but Rogue Legacy 2 is finally here. Can Rouge Legacy 2, which has recently entered its early access period, manage to live up to the legacy of its well-loved […]

It may be a few months away, but there’s never too early a time to begin thinking about Halloween! If you’re looking to get in the spooky mood before the big day, you might be attracted by the prospect of a good horror game. House on the Hill is one such game; a recently released […]